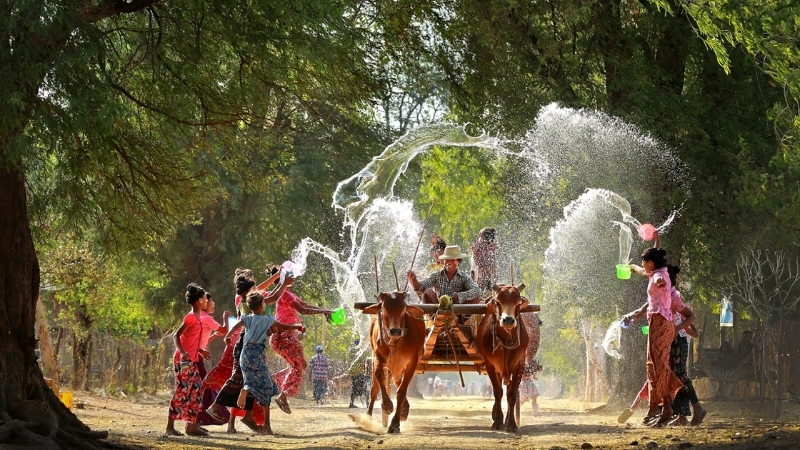 Thingyan is the most significant annual festival on the Myanmar calendar. Held over several days, it marks the end of the hot, dry season and the start of the New Year: the beginning of the Myanmar lunar calendar and celebrates life and rebirth.

The Burmese douse one another in water in the belief that it will dispel the sorrows and bad luck of the previous year and welcome good fortune in the new one. They also believe this practice purifies the body and mind and represents their aspirations for a prosperous life, as well as a peaceful and bright future for the whole nation.

The national flower of Myanmar, this sweetly fragrant flower only blooms once and only for one day with the first showers of rain in April. The first bloom from a household’s Padauk tree is offered to Buddha.

Early in the morning, people gather in a central area, and traditional music and dance performances welcome the New Year. Then, they visit their temples and pagodas to pray for a lucky year ahead. They also perform good deeds, such as making food offerings, money and goods to the monks and paying homage to their parents, teachers, and the elderly. A traditional offering consists of a green coconut with its stalk intact encircled by bunches of green bananas.

Other unique traditions during Thingyan include younger generations’ visiting their elders to wash their hair as a cleansing act, and another is catching fish from drying up ponds and releasing them in larger bodies of water with a prayer and wish: ‘I release you once, you release me 10 times.”

Since the February 2021 military coup, many people won’t be celebrating with the same enthusiasm as before the takeover but,

we wish the people of Myanmar much strength in their New Year.

Please support the Shanta Foundation’s work in Myanmar and Zambia by donating today.